1823/2 Quarter, Which was with the private member was then auctioned by Stack’s Bowers Galleries.

“The reason for the 1823/2 date is because the mint used an 1822 die and simply superimposed a 3 over the 2 in the fourth position,” explains Stack’s Bowers Galleries in a statement. “If you look closely, you can still see the 2 beneath the 3.”

Around 30 of the Coins are Thought to Exists So Far. 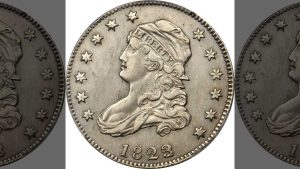 “To think that one of the U.S. mints would just layer a number on top of another is incredulous by today’s standards,” said Stack’s Bowers President Brian Kendrella, in the statement. “But that’s what gives this quarter its character and sets it apart from other years. It’ also part of why it’s so valuable and sought after.”

One of Another Worlds Rarest Coin Dates Back to 723AD Was Made from Gold Sold For Around 1.6 Million Euros.

Why Antique Coins Business or Value is not Thriving in Asia?